Rotunda – our digital showcase for touchscreens 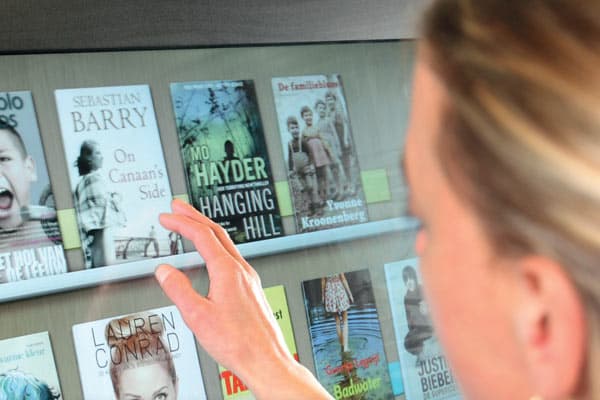 H2 Interactive came to BSL with an idea for a digital showcase: a large touch screen application, where users could browse through information about books, CDs and other media. And they came to the right people! BSL went on to design the product and create the software, later marketed by NBD Biblion as ‘Rotunda’.

Using Rotunda, libraries and bookshops can create and display any number of digital ‘bookshelves’. When new titles appear, or if particular titles are to be promoted alongside a certain theme or event (e.g. the annual Book Week, a sports event, or the release of a film), new titles can be added in a few minutes. See an example of Rotunda in use at the Eemland library. Bookshelves containing the selected titles scroll automatically across the screen. By touching one of the covers, a variety of information is displayed such as the title, author / director, publisher, year of publication – even films! A short review can also be included, and whether or not the title is currently available. Users of Rotunda in libraries can instantly reserve any title using their library pass.

The contents of any number of Rotunda displays can be managed via a central web-based Content Management System (CMS). Each Rotunda display connects with the CMS to retrieve and show the bookshelves it should display. If the CMS contents are modified, all Rotundas located throughout the country can be automatically updated to show the most up-to-date information available.